Walking with the Ancestors Part 4-B

Usti strode along the bank of the ancient river, known from the earliest times as the home to his people. Here, for ages long past, and far beyond the memory of the living, his ancestors and their ancestors had made their camps.

He looked around, and pulled his furs tighter around him. He knew well that the cold winds would be coming soon, and the snows of winter. He walked up river, towards the source of the waters, because that was the way that would lead him back home, and to his mate and children.

As he rounded a bend in the river, the camp came into sight. Several of his friends and relatives were busy working on their homes. The nearest of these was erected from the bones of a mammoth, which had been taken during the last hunt. The large, heavy bones made up the walls, and the woman of the house was busy lacing together reindeer antlers, which would be used as part of the roof. Their son was helping too, busy pulling new furs and hides over their home. Everyone in his village knew the cold would be coming soon.

Smoke rose from several of the houses, but he was heading towards the one he shared with his family. He passed by several other houses as he walked, and many people greeted him from around their outdoor fires. As he passed by another house, a man with a shirt of wolf skin caught his eye. Usti nodded, because the man was one of great honor. He was the one who Spoke with the People.

The two men held their gaze for a moment, and then the Old Wolf came over to Usti.

“Have you been walking the river again?” The Old Wolf asked.

“I watched the fish as they swam down the river. I came upon a group of deer farther down, and they ran once they saw me.” Usti said. The Old Wolf nodded.

“That is the way of these things. Is your mate well?” The Old Wolf said, and Usti saw something in his eyes. He knew that look well, and he knew that the Old Wolf had knowledge that Usti did not.

“She was well when I set out this morning. She is heavy with child, and has trouble walking.” Usti said, with a laugh. The Old Wolf nodded.

“She will be having a girl.” The Old Wolf said. Usti felt the smile cross his face.

“A girl?! It will be my first daughter!” Usti exclaimed.

“It will be. And she will be a fine hunter, among the finest.” The Old Wolf said.

“The People have told you this?” Usti said. The shaman nodded.

Usti could barely contain the joy that he felt. He would have a daughter, and she would be a fine hunter. He filled with pride, but still he saw the look that lingered in the Old Wolf’s eyes.

“Is there more?” Usti asked.

“Would you walk with me?” The Old Wolf said.

Usti nodded, and the two of them set out of the village towards the west. He walked in silence by the old man, because he knew it was rude to break the silence just for the sake of talking. The Old Wolf was wise beyond any man, and when he spoke others listened. The Old Wolf was not the kind to speak of trivial things, and he was also the kind that kept much knowledge to himself. Usti had only spoken with the man a handful of times.

“There are things you should know, because my time among our people is short.” The Old Wolf said.

“You have many winters ahead of you.” Usti said. The Old Wolf shook his head.

“No, that is not what the People have in store for me. I fear the People may call to me before the coming one has ended. Or maybe the one after next, if they are willing.” The Old Wolf said.

“Why do you tell me these things?” Usti said.

“Because they must be said before I am called away. It is about your daughter.” The Old Wolf said.

“You said she will be a great hunter. What more could a father want?” Usti said.

“She will be more than a great hunter, Usti. In time, she will grow to be much more than that.” The Old Wolf said, as he started to undue the lacing of the old black wolf who kept watch over his shoulder.

“What are you doing?!” Usti exclaimed. The Old Wolf slowly folded the black fur, and muttered to himself all the while. Usti stood staring at him speechless.

At last, the old man held out the fur to Usti. Usti stepped back several paces.

“It is not for you. In time it will be for your daughter.” The Old Wolf said.

The Old Wolf pushed the black wolf skin into Usti’s hands, making it clear that he had no choice but to take it.

This one is a little bit shorter. I worried about it getting too long if I kept it going. Admittedly, I had to take some liberties with this one. Give or take 10,00 years worth of liberties. This is because that all we have of the Ust Ishim man is a femur, and while the genome it has given us is nothing short of amazing; there is still a lot we do not know about the time when the Ust Ishim (uncreatively called Usti here) lived.

His femur was not found in the context of a village, and as far as I know, not even in the context of other bones. Aside from the genome sequence from the bone itself, it has little else to tell us about archaeologically. As such, I used inspiration from other similar sites scattered across the Upper Paleolithic. The inspiration for village was from the Malta-Buret Culture, which will appear again in this series. Other inspirations include several years worth of research and study, and I cannot detail them all here.

Join me next time as I take the next step in this journey.

And as always, thank you for reading!

Walking with the Ancestors Part 4-A

In the last chapter of this series I discussed some of the finds around in the Altai Mountains in modern day Siberia, dated between 50,000 and 30,000 years ago. The oldest of these two finds was a neanderthal woman, who lived some 50 kya. The other find was a little girl, a Denisovan, who had lived sometime around 30 kya. Between the two of them, we see a continuity among my ancestors, who were in the area for at least twenty thousand years. As I pointed out in the comments of Chapter 3C, there was also the remains of a dog found in a nearby cave.

For this chapter I want to continue our journey, but before I do I think it is important to recap a little bit about how the world looked around 50 kya. First off, as was evident from the last chapter in this series, our H.Sapiens ancestors migrated out of Africa and into a world already inhabited by other homins. The most prominent of these was the Neanderthals, who had a range that stretched from western and northern Europe, down through the Middle East and into East Asia.

In addition to the Neanderthals, there were others species/sub-species of homin in the area as well. The Denisovans are a notable examples of course, but there may have been others as well. It is important to note that these debates are ongoing within anthropological and archaeological disciplines. In short, the jury is still out. 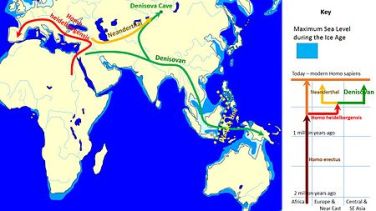 The spread of Denisovans, Neanderthals and Modern Humans, from Wikipedia Commons

The extent of the Weishselian glaciation (Europe), from Wikipedia Commons

The world was filled with homins as Modern Humans spread out from Africa over the millenia. More than this though, the world was also covered in ice. The Weishselian glaciation, which lasted from 115,000 BP to about 10,000 BP. For over a hundred thousand years, while the Neanderthals roamed southern Europe and our ancestors came out to meet them, most of the northern parts of the globe were covered in an untold amount of ice and snow. This is the world our ancestors lived in.

From about 50 kya years ago down to about 10 kya years the world was in the time period known as the Upper Paleolithic, and it was a time of a flourishing of art and artifacts across the world. Modern humans spread across the globe, leaving behind them a host of rock art, cave paintings, and tools of all sorts, made of bone and flint in an increasing variety and sophistication.

Which brings us to the next part of our journey, around 45,000 years ago. Here I match with a male in Ust-Ishim, in modern day Siberia. This find is a bit to the west of the Altai Mountains.

“In 2008 the Russian artist Nikolai V. Peristov was searching for ivory to make carvings out of along the river banks of Irtysh near the town Ust’-Ishim in Siberia.

Instead of ancient ivory he discovered something even more magnificent: a 45.000 year old male thigh-bone, a femur.” From Science Nordic

This was how the story of the Ust Ishim man began, and after a few hand offs find made its way into the hands of the experts at the Max Plank Institute, and one man who is one of the leading experts in the field of ancient DNA, a Swedish man by the name of Svante Pääbo. If you recall, he was also one of the leading experts behind the sequencing of the neanderthal DNA at Denisova.

The Ust Ishim man was a spectacular find, because it only added to the work that Dr. Pääbo had already done;

“Pääbo’s team of scientists have previously mapped the genome of our closest relatives, the Neanderthal, from 50,000 year old bones. Their studies have shown that our ancestors had children with the Neanderthals during their migration to Europe. This means that all people outside Africa today carry about 2 percent Neanderthal DNA in their genomes.

It has been estimated that this intimate meeting took place between 37,000 and 86,000 years ago, but with the new information from the Siberian man from Ust’-Ishim, this has been narrowed down to 50.000-60.000 years ago.

The scientists found that the Ust’-Ishim mans genome contained Neanderthal segments that are 2-4 times longer than in us today. This allowed them to calculate that the Neanderthal DNA was introduced between 232 and 430 generations earlier.” From Science Nordic

The reasons that DNA varies so much over time is because that it is constantly being reshuffled each time a new generation is conceived. As the New York Times puts it, it is kind of like the shuffling of a deck of cards;

“During the development of eggs and sperm, each pair of chromosomes swaps pieces of their DNA. Over the generations, long stretches of DNA get broken into smaller ones, like a deck of cards repeatedly shuffled. Over thousands of generations, the Neanderthal DNA became more fragmented.

Dr. Paabo and his colleagues predicted, however, that Neanderthal DNA in the Ust’-Ishim man’s genome would form longer stretches. And that’s exactly what they found. “It was very satisfying to see that,” Dr. Paabo said.” From New York Times

That being said, I have a lot more in common with the Ust Ishim man than I do with the neanderthals…

And with that is where I will leave off with this post. I am trying to dig up more research about what life might had been like around 50 – 40 kya in this region, but so far I have not come up with much. Of course I will keep on digging.

As always, thanks for reading!