Spirits of the Waters

(Me, kayaking on a local river)

I am sorry that it took so long to get another post out to you all. Truth be told, I have been struggling with the writing a little bit. It’s not a lack of interest or a lack of material, but a lack of energy and free time. My day job has been really stressful, and that has taken a lot out of me. It makes extraneous tasks a bit harder. More than that, it’s summer, so I have been spending more time outdoors. I have also been spending my time reading on nice days. For what it is worth, the Expanse series of novels is really good. I’m on number four now.

All that aside, today I wanted to continue my series on the spirits. You can find the previous posts about forests here , and about the dead here. It was also inspired by the last fall’s trip to Michigan State University, which you can find here.

I’ll like to add another post to that series today, but before I do I wanted to make a few quick notes. You might be wondering what the point is to all of this? If I may make a statement of intent, the recent series of posts on spirits is for me to hash out some of the details of my own cosmology. I draw a lot of inspiration from my ancestral cultures, especially Finnish and Nordic, but also with some Irish/Scottish/Celtic/English thrown in. That said, it’s been a long time since my family has been immigrants, at least seven generations of my family has been born in North America. As such, while my ancestors inspire me, my animism and spiritual practice is very much grounded in the contemporary here and now. It is one part inspiration, and one part bioregionalism. I’ll talk a lot more about this in the next post, as a kind of ‘hybrid’ form of spirituality.

But I don’t want to go too far down that past just yet. So instead let’s talk about the spirit of the water. In Finnish folklore, these spirits are called the veden väki, the people/energies of the water. I love the Finnish concept of väki, because it has two simultaneous meanings. It means the energies of a place, in a very real physical sense. The cycles of energy and matter in an ecosystem, including the plants, animals, air, and the earth in that system. It is the constant flow of energy that often goes unseen and unremarked. The second sense, is that the väki are the folk of a location, the people; the spirits of a place. Again, this can be in a very physical way. The fish, the water plants, the bugs, the water fowl, all of them. It can also include the more spiritual ‘unseen’, whether metaphors, meaning narratives, or other more metaphysical methods. 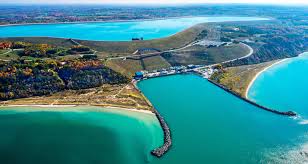 Why water spirits? Well, first and foremost, water is essential to all life on Earth. The hydrological cycle from ocean to rain, river to lake, is absolutely vital to everything we know. Water is life, essentially and fundamentally. 70% of our planet is covered in water, and approximately the same percentage in our own bodies. That is why the veden väki are often present in healing and sustenance folklore. Water is vitality, vital for healing as well as longevity.

More than this, my home state of Michigan is defined by water and the spirits of water. The very name of the state comes from Ojibwe, mishigamaa, which means “large water” or “large lake.”

The picture of me kayaking above is on a local tributary of the Grand River, whose Native American name is O-wash-ta-nong, meaning “Far-away-water'” thought to refer to the length of the river. The Grand River is the longest river in the state, at 406 kilometers (252 miles) from Hillsdale County to where it meets Lake Michigan in Grand Haven. Through it’s local tributary (and with a surplus of vacation time) I could kayak from my house all the way to Lake Michigan.

In addition, Michigan is bounded by four of the five Great Lakes, which make up 1/5 of the world’s total fresh water.

Aside from Alaska, Michigan has the longest shoreline of any other state, at about 3,288 miles not including islands. This is the same approximate length of the Atlantic Coast from Maine to Florida. There is a reason the Great Lakes region is often referred to as the “Third Coast”.

It would be easy to cite facts all day, but that is not what I want to do. My homeland is amazing in a lot of different ways, not the least of which that I can bike and kayak so many major waterways without going far from home. Plus the state is like 51% forest, and that surely pleases my Finnish ancestors. This state, this land, is as much the land as it is the waters. Together, the two aspects of Michigan are what make it home for me. It is an essential part of my spiritual practice, as much as it is an essential part of the land that practice is rooted in.

My childhood was spent in the rivers, lakes, streams, and forests of Michigan. The forests defined me, and the waters shaped me. The väki of metsän and veden are part of me, literally and figuratively. They are the spirits of my home, and of Michigan. Finland seems far away, but also very close to home.

I am a writer, author, hunter, craftsman, and student of anthropology/archaeology. END_OF_DOCUMENT_TOKEN_TO_BE_REPLACED
This entry was posted on Thursday, August 1st, 2019 at 12:58 PM and tagged with Animism, ecology, environment, Finland, Folklore, Great Lakes, Michigan, Spirits, spirituality, Water and posted in Ancestors, Animism/Shamanism, Anthropology/Archaeology, Environment/Ecology, Folklore, Great Lakes Region/Midwest, Michigan, Religion/Spirituality, Science, Spirits. You can follow any responses to this entry through the RSS 2.0 feed.
« Random Roundup, 7/1/19
Spirits of Michigan »

One response to “Spirits of the Waters”