Towards a Networked World

“We, each of us, are parts of a greater whole. Still, this relationship is shaping and will continue to shape much of our existence. It has implications for our lives as individuals and those of our children…

On a global scale, human civilization is a single organism capable of remarkable complex collective actions in response to environmental challenges.” 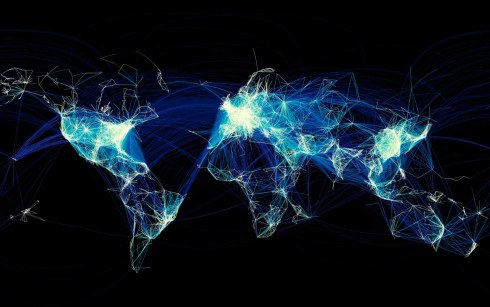 In the last part of this series, I left off with a quote by Harding that suggested that while science and technology has made us quite clever, these things alone have not made us wise. He went on to suggest that the fusion of animism with science would ask us to replace mechanistic understandings of the world, with more animate ones. In short, Harding asks of us to consider the planet as one whole being, a planetary organism.

This is an important place to start our discussion, as it will have huge implications to explore in the rest of this piece. More importantly, this is the point where animism (as I understand it), is going to be central to our understanding of the future of ourselves and the planet. It means, our civilization is in fact an extension of nature, and of the evolution of our planet. Civilization is the next step, an emergence out of cosmic physics and evolutionary biology. It emerges from our own nature, as social human beings enmeshed in the planetary systems of Earth.

Yet, just like evolutionary process, so too is our own unguided. Whether we succeed or fail as a civilization, and as a species, will be influenced by how well we are adapted to our environment. In other words, our fitness to be part of the planetary systems. If we are unfit to our environment, unable to find a balance, unable to adapt, we will perhaps go the way of countless extinct species.

So the question becomes, what might be some of the steps we need to take to be a more integrated and harmonic part of the planetary organism?

If you ask me, part of the answer will be to take our place as a kind of planetary “nervous system.” Our human civilization might become the “thinking” part of the planet, that integrates all the parts, and keeps them regulated. Just like our own bodies, the health of any individual system is vital to the health of the whole. The nervous system cannot survive without support of the bone and blood (geology), the respiratory system (forests, ecologies, weather), or the circulatory (oceans, waters) systems.

Going a step farther, this also includes our own selves, and the sociopolitical makeup of our societies. In short, how we organize ourselves matters. More importantly, there are likely better ways to manage a planet. Some time ago, I wrote about the End of Nations, in three parts. The gist of this all is, that Nation-States are the result of specific historical processes, but they may not be the best way to regulate a planet. There are plenty of thinkers, scholars, and scientists trying to come up with other ideas.

Which brings us to the article I want to discuss today. Our civilization, when compared with any other time in history, is much more complex. The article that highlight this fact is called Complexity Rising, by Y Bar-Yam. The quote at the top of this piece comes from the same article.

The article itself is very dense, and I will not have the space here to cover it all. Yet, if the quote at the top of this piece is any indication, what I want to explore today is the complexity of our current civilization, and what this might mean for our future. 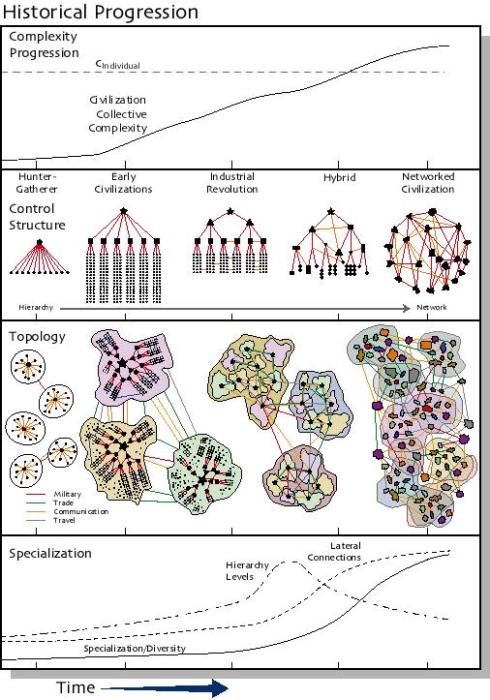 In order to move this this conversation forward, I want to draw your attention to the above graphic. This image from the article speaks volumes about what I want to talk about, and in a way that allows me brevity. Bar-Yam lays out the case for the historical changes of our social structures. Moving from left to right, we can see the steady rise in complexity, from hunter-gatherers up to the Industrial Revolution. By the time we get to the last panel on the right, we see something very integrated, networked, and dare I say… organic.

Right in the middle there is a spike in hierarchy. This is the Industrial Revolution. During the industrial revolution, as I talked about in more depth in my End of Nations series, hierarchical and bureaucratic structures exploded. Part of the reason is because industrial economies are more complex, and need more actual governing. The rise of the Nation-State was connected to the rise of industrialization, as the graphic clearly shows.

Also, I think that the graphic is very consistent with Kaku’s “birth pangs” of planetary civilization. Do you see the drop on the far right of the graphic? That indicates a breakdown of hierarchies, as we transition to more lateral and networked world. Those hierarchies are present in our governments and social institutions. That is the world as we know it, and I think it is already breaking down. But overall, I think that breakdown is a good thing in the long run, because the other side is a more equal, egalitarian, and networked world. 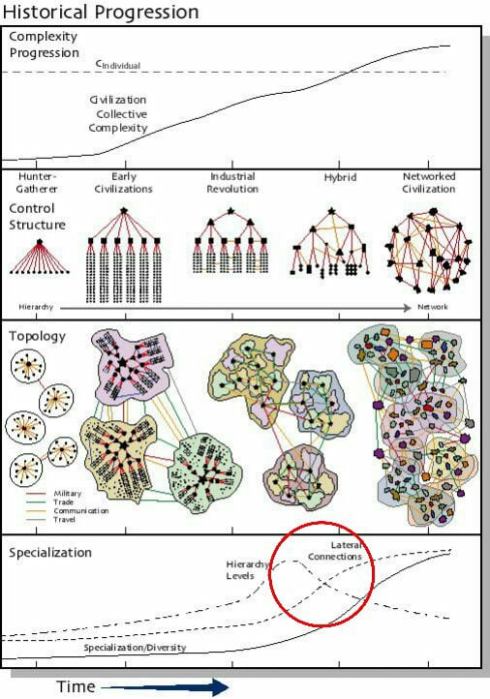 (The Transition, breakdown of hierarchy and rise of the more networked connections.)

There is a lot of talk in pagandom about long descents, storms a’ coming, late stage capitalism, rise of hierarchy, fascism, oligarchy, ect. I think there is some truth to these things. For instance, I think we are in a time of birth pangs, a new world awaits at the end of a messy process. It’s not going to be easy, but I don’t think it’s the end of the world either.

The drop after is the transition. That’s the storm. That’s late stage capitalism. That’s the birth pangs of transition. Like a cocoon of metamorphosis. We can already see some evidence of that transition. The EU is at least a prototype of a what a more networked world might look like. A post-nation kind of integration. .

“Even so, the EU may point the way to what a post-nation-state world will look like.

.., further integration of Europe’s governing systems is needed as economies become more interdependent. But… Europe’s often-paralysed hierarchy cannot achieve this. Instead… the replacement of hierarchy by networks of cities, regions and even non-governmental organisations.” (From End of Nations)

I prefer ideas that are more democratic, more autonomous, but also deliberately networked. Networks of cities and regions could be all these things, as well as more flexible and adaptable to complex problems such as climate change. Nation-states have a real structural problem dealing with many of these challenges. They are centralized, and inflexible. They were not designed to handle these kind of challenges, and are often paralyzed in dealing with them. Nation-states, and even international institutions are often too hierarchical to deal with problems that require complex and nuanced solutions. 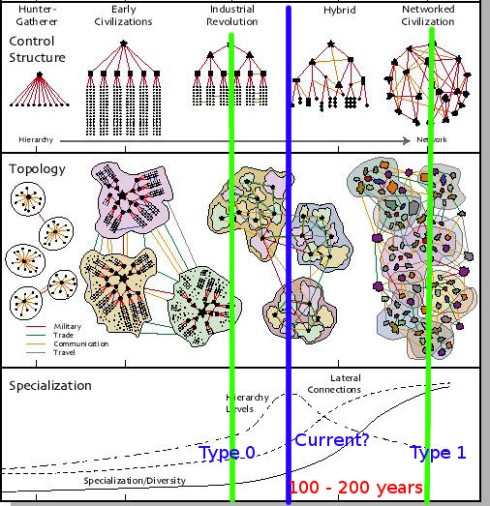 But there is another thing that is important to point out here. As you can see from the graphic above, there is a long gap from the decline of hierarchy, to the rise of replacement hybrid lateral structures. I will be talking a lot more about what that looks like in a future post, but for now I can say that that transition will not be fun. The decline of hierarchy may well mean the decline of Nations, which on the whole may not be a bad thing in the long term, but it will be chaotic in the short term. This breakdown could also affect other massive hierarchies aside from governments; but also large corporations and international institutions. That could be bad news for a lot of people.

As such, I think it is important, while hierarchy declines, that we focus on building alternative hybrid and lateral structures. Things like cooperative workplaces, and community organizations that can help mitigate the gap. More on that in the future too.

The short version, is that I agree with aspects of both Kaku and Bam-Yam. A planetary civilization would be more networked, and less hierarchical. But how can we start the synthesize these two ideas?

“Like it or not, our societies may already be undergoing this transition. We cannot yet imagine there are no countries (States). But recognising that they were temporary solutions to specific historical situations can only help us manage a transition to whatever we need next. Whether or not our nations endure, the structures through which we govern our affairs are due for a change. Time to start imagining.” End of Nations

It certainly is time that we start imagine what the future might look like, and this is a theme I will revisit in future posts. We need to imagine big, so that we can then use that big vision to create small, manageable goals. That way we can create a better tomorrow, after a bit of a slog through the transition.

With that all in mind, what does that vision look like? Well, at least for me, we can start bringing together all the various threads I’ve lain out in this post and the previous one.

From Kaku’s work, we can run with the idea that we are on the path towards a Type 1 Planetary Civilization. This civilization will be more integrated, more multicultural, more scientific, and more tolerant. The transition to a Type 1 civilization will take the next century or two, and we are already seeing the first aspects of that in things like the internet and the EU.

But Bar-Yam in this post, adds more onto this vision. The EU may be an early prototype for a Type 1 civilization, but it is also the prototype for a post-national world. A world that is more networked, more integrated, less hierarchical, as well as egalitarian and democratic. Bar-Yam also points out, that we are already undergoing this transition. The old world is breaking down, and the new one is on the way. But it is a not guaranteed and we are at a crucial juncture.

I think on top of all this, the new world will have to ecological and sustainable as well as democratic. With integrated and flexible networks of power, our civilization would be more adaptable and able to respond to climate change. As was pointed out by Bar-Yam in the very first quote at the top, our civilization, and our planet, function together like one large organism.

In short, we need to “think like a planet”, and this is our bridge towards the next big author I want to discuss in tandem with this one. In a future post, I will talk about Adam Frank’s new book, The Light of the Stars.

It is my hope that it will help to pull all these assorted threads together, so that we can move towards a synthesized vision of the future.

I am a writer, author, hunter, craftsman, and student of anthropology/archaeology. END_OF_DOCUMENT_TOKEN_TO_BE_REPLACED
This entry was posted on Monday, August 6th, 2018 at 1:02 PM and tagged with future civilization, hierarchy, networks, transition, Y. Bar-Yam and posted in Animism/Shamanism, Anthropology/Archaeology, Culture, Environment/Ecology, Heathenism/Paganism, Politics, Religion/Spirituality. You can follow any responses to this entry through the RSS 2.0 feed.
« Liminal Worlds, New Novel!
Towards a Sustainable World »

5 responses to “Towards a Networked World”